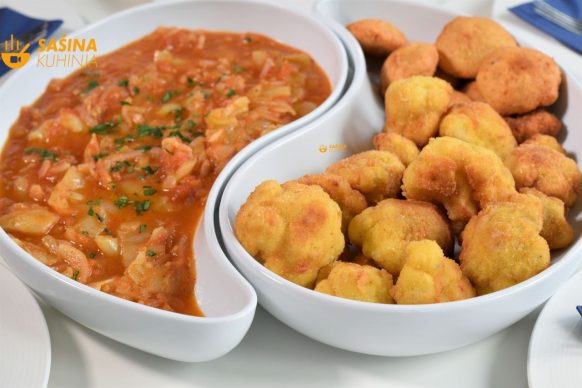 Cauliflower Fried in Breadcrumbs Recipe. Watch the video recipe at the bottom of the page, bellow the written recipe

1. Separate the cauliflower into flowers. They must not be too small.

2. Put in a pot and pour 4 dl of water over it. As soon as it boils, cook cauliflower for 5 minutes over medium heat. Keep it covered and stir every now or then.

3. After the time has elapsed, remove the pot from the heat. Take the cauliflower out, place on a plate, and leave to cool for about ten minutes. Do not throw away the water where the cauliflower was cooked. You will need it later. It is an excellent cauliflower base. There should be about 2.5 – 3 dl left.

4. Now add extra virgin olive oil to the hot pan. It can also be sunflower oil if you don’t have or don’t consume olive oil, it will be just as delicious.

5. Slice the peppers, put them in the pan, then fry for a few minutes, add the sliced ​​onion, and continue for a few more minutes.

7. Pour the cauliflower water over it and cover for 5 minutes, then cook on medium heat.

8. TIP: Don’t forget to press the tomato a little before you cover it.

9. After the time has elapsed, remove the tomatoes‘ skin and mash briefly and return to the pan.

10 TIP: Instead of mashing with that masher and taking the tomatoes out of the pan (as I did in the video recipe), you can also lightly mash the tomatoes with a spoon. Anyway, it will be really delicious no matter how you make it.

11. Add sugar, a pinch of salt, and optionally a mixture of spices and pepper (amount as desired and to taste).

12. Continue to stir for just a few minutes and remove from the heat.

13. TIP: Don’t finish the sataraš and remove it from the heat while still a little sparse. This way, you will complete the side dish when the breaded cauliflower is ready, and the side dish will be warm when served with the main course.

14. Put bread crumbs in one bowl. In another put eggs, a little mixture of spices, nutmeg. In the third bowl, add flour and Parmesan / grated cheese. Stir well.

15. Bread the cauliflower in the following way: flour with parmesan/eggs/bread crumbs (breadcrumbs).

18. Return the sataraš back to the heat and as soon as it boils, cook for just another 5 minutes and serve

And Cauliflower Fried in Breadcrumbs with satarash is ready to serve

This site uses Akismet to reduce spam. Learn how your comment data is processed.

Find out more or adjust your settings.

This website uses cookies so that we can provide you with the best user experience possible. Cookie information is stored in your browser and performs functions such as recognising you when you return to our website and helping our team to understand which sections of the website you find most interesting and useful.

Strictly Necessary Cookie should be enabled at all times so that we can save your preferences for cookie settings.

If you disable this cookie, we will not be able to save your preferences. This means that every time you visit this website you will need to enable or disable cookies again.