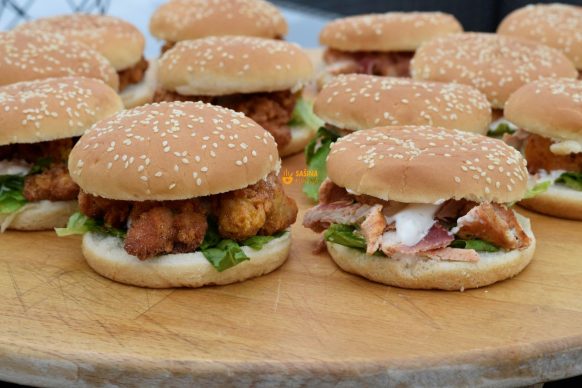 Turkey Fillet Two Simple Recipes. Watch the video recipe at the bottom of the page, bellow the written recipe

1. Cut the turkey breast into smaller steaks, as shown in the video recipe.

2. Prepare a mixture of spices (or salt), sweet pepper (Aleva pepper), a little garlic powder, pepper, and yogurt and add over the meat.

3. Stir everything well and leave in the fridge for at least an hour (maybe overnight), stirring occasionally.

4. For the second variant and definitely the fastest, cut the turkey into nugget shapes and add salt, pepper, flour, and stir.

5. Whisk the egg on the side and mix with the meat.

6. Now roll turkey nuggets in bread crumbs or like me in cornflakes, which ultimately has a phenomenal taste and is really a huge recommendation.

7. Fry for a few minutes in deep fat until the desired color and leave briefly on a napkin to drain any excess fat.

8. Take out the turkey for homemade kebab and stack on a large skewer (or two) that you have dipped through the halved larger potato.

10. If desired, you can put a slice of prosciutto or ham between each piece of meat.

12. After 45 minutes, remove the potatoes from the side and leave for another 15-20 minutes in the oven to bake.

13. Take the dish out of the oven and immediately slice while hot.

14. TIP: Don’t throw away the potatoes (at least not the one above) because they taste like potato poles (shelves), just peel it and add a pinch of salt.

And Turkey Fillet Two Simple Recipes are ready to serve

This site uses Akismet to reduce spam. Learn how your comment data is processed.

Find out more or adjust your settings.

This website uses cookies so that we can provide you with the best user experience possible. Cookie information is stored in your browser and performs functions such as recognising you when you return to our website and helping our team to understand which sections of the website you find most interesting and useful.

Strictly Necessary Cookie should be enabled at all times so that we can save your preferences for cookie settings.

If you disable this cookie, we will not be able to save your preferences. This means that every time you visit this website you will need to enable or disable cookies again.